Stress could be either physical, mental or both.

This system is based on over three decades of profound scientific and medical researches of highly renowned medical professors and different scientific institutes.

Stress means different things to different people. In common language, people recognise a state of having too much expected of them, of being under pressure or strain, of being barely able to cope with some external demand which is both excessive and prolonged. It has a number of synonyms, but they all carry the connotation of unreasonable demands being placed on the individual in an emotional, mental or psychological sense.


This Section describes the science and terminology relating to QAthlete's Stress Assessment. It clarifies how and why the body seeks homeostasis using the autonomic nervous system and why stress disrupts this process. It then describes how Heart Rate Variability (HRV) measurement can be used to indicate the degree of this disruption because of the relationship between HRV and autonomic nervous system balance.

In order to survive the body seeks to maintain a condition of balance or TequilibriumT within its internal environment, referred to as 'homeostasis', even when faced with external changes. A simple example of homeostasis is the healthy body's ability to maintain an internal temperature around 37 TdegreesT Centigrade whatever the temperature outside.


Homeostasis is controlled by the central nervous system, that portion of the nervous system consisting of the brain and spinal cord. It mediates the distribution of resources to and the functional state of organs in the body to deal with demands from the:

Why, in medical parlance, is stress therefore not universally measured, analyzed and treated? Why, indeed, has it often been denigrated or ignored or consigned to a fringe area of medicine? The answer is that doctors tend only to believe that which they can measure, observe and classify. It is this lack of physical presence, this inability to biopsy, photograph, probe or quantify which has led to stress not having been considered a part of conventional medicine for so long.

Despite the ignorance and disinterest that much of conventional medicine has shown to the study of stress, recent developments in physiology and bio-mathematics has led to increased insights into measuring the effects of stress on the body. This can also allow us to estimate not only the impact of stress on the body, but also how much reserve capacity is left to cope with further stress, whether it be physical stress (such as heat, cold or exercise) or psychological stress. 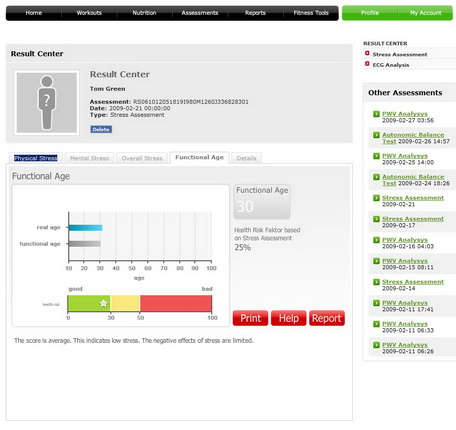