The pulse wave is a physiological phenomenon, observable and measurable in the arterial system during blood circulation. During one heart systole a certain blood volume is expelled. This propagates through the arteries due to the reciprocal transformation between kinetic energy of a segment of the expelled blood volume and the potential energy of a stretched segment of the resilient vascular wall. We can observe the changes in pressure, blood flow, velocity and profile throughout the whole pulse wave. It can be used for classification of the artery elasticity. 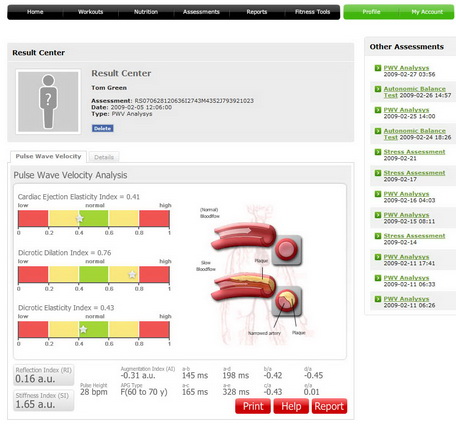 Aortic PWV nowadays is considered as a marker of CV risk independently of blood pressure level, but in conjunction with heart rate. Since PWV is increased particularly in the elderly, this analysis may be considered as important for geriatric populations.

S (Starting point)
Starting point of arterial pulse-wave. Aortic valve opens and the blood of the left ventricle is discharged.

Early detection of
1. Hypertension
2. Arteriosclerosis (hardening of the arteries)
3. Blood circulation status
4. The relative age (biological age) of blood vessels
5. Disturbances in the smaller blood vessels not found when measuring you blood pressure with a cuff

PWV Analysis -Arterial stiffness indexes (EEI, DDI and DEI) can additionally suggest to healthcare professional to begin appropriate treatment long before the symptoms or clinical signs appear. Age and systolic pressure strongly correlate with PWV. In fact, the most important factor contributing to increase in PWV is age because of increased arterial stiffness caused by medial calcification and loss of elasticity. Some studies suggest that the increase in PWV could be an early indicator of atherosclerosis development (as diabetes); other studies show no significant difference in PWV with age in subjects predisposed to a high risk of atherosclerosis, such as familial hypercholesterolemia. However, there has been a qualitative association between the process of atherosclerosis and arterial rigidity; PWV studies indicate that hypertension contributes more than atherosclerosis to increased arterial stiffening with age.

Large artery damage is a major contributing factor to the elevated cardiovascular morbidity and mortality observed in cardiovascular risk factors such as hypertension. Reduced arterial distensibility contributes to a disproportionate increase in systolic pressure and an increase in arterial pulsatility, which has been shown to be associated with an increase in cardiovascular morbidity and mortality. Pulse wave analysis provides information on stiffness and distensibility of an artery. The measurement of pulse wave velocity is useful in the study of the effects of aging, vascular diseases, vaso-dilating and vaso-constricting agents on arteries.

The condition of the major arteries is the key to better prevention and diagnosis of cardio-vascular related illness. In particular, the stiffness of the major arteries is a strong indication of potential health problems including, heart attacks, heart failure, diabetes, and renal complications. While blood pressure is a useful first-level indicator of hypertension, it doesn't give the full picture. During the test, the baroreflex-induced pulse pressure changes the elastic properties of the arterial wall and induces its movement. The effects of the baroreflex can be measured by measuring the movement of the arterial wall.

QAthlete Pulse Wave Velocity measurement a part of the HRV analysis acts as a supplemental convenient way to quantify stiffness of the major arteries. QAthlete - Pulse Wave Analysis - Four minute procedure during Resting, is non-invasive, cost effective supplemental indicative measurement of the relative health of major arteries, but also to monitor the effects of any ongoing therapy, treatment or dietary changes.

Screening risk factors by early detection of abnormal arterial-wall function
* Identifying the arteriosclerosis and arterial aging.
* Monitoring the effect of treatments for patients with hypertension and other cardiovascular disease.
* Evaluating the efficacy of prescribed lifestyle modification and medications.

Increased value = > 0.7 = dilation of artery (possible due to acute anxiety)

Decreased value < 0.3 = possible decreased vessel elasticity/arteriosclerosis in the peripheral portion of the arteries